The Power of Public Art 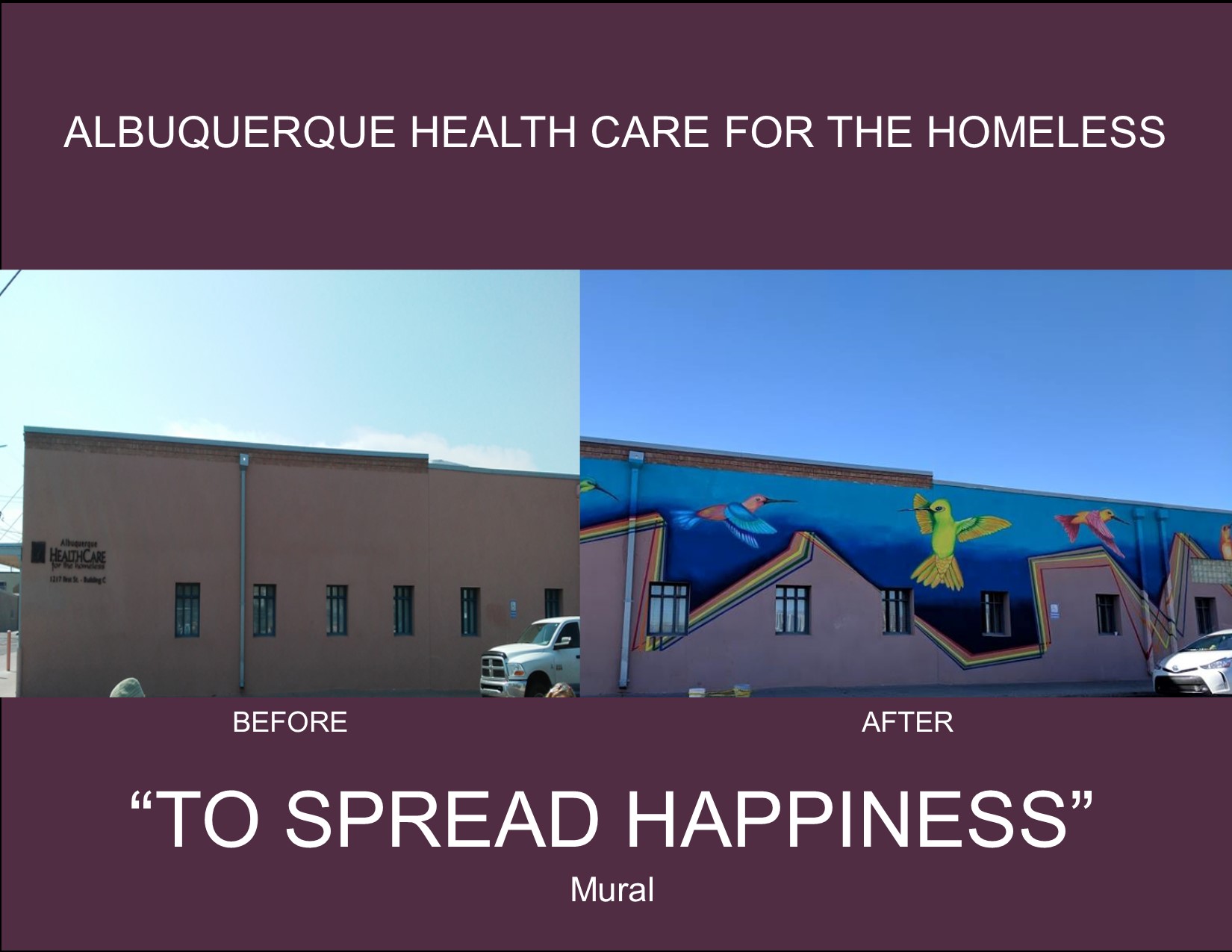 The Power of Public Art

2017 marked the 50th anniversary of the Wall of Respect mural in Chicago, which started a movement of inclusion of marginalized communities through public art. AHCH’s new mural which is titled To Spread Happiness was unveiled on December 14, 2017.  In partnership with the University of New Mexico College of Fine Arts, Albuquerque Public Art, New Mexico Arts, UNM Mural Project and Working Classroom, AHCH brought the movement and powerful tradition to Albuquerque en masse. 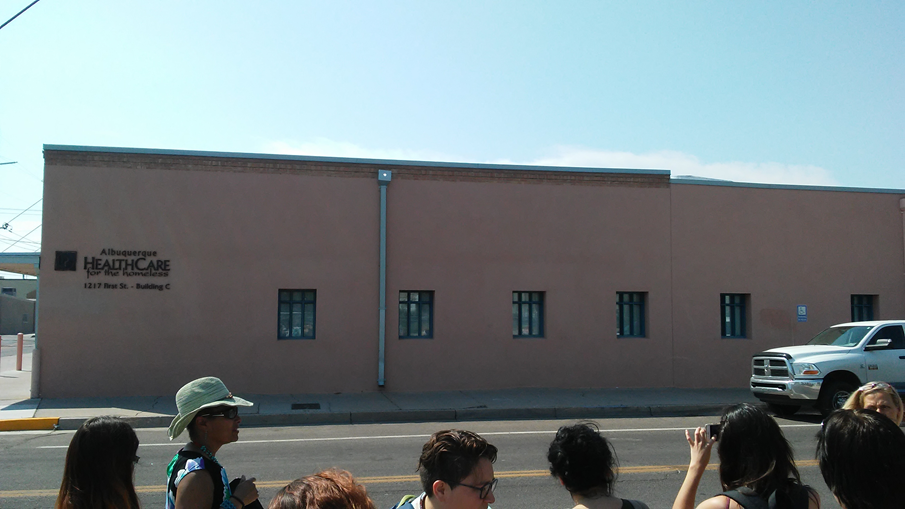 Dr. Kymberly Pinder, Dean of the University of New Mexico College of Fine Arts, and renowned muralist Nani Chacon, focused on the history of murals, from cave painting to graffiti, while concurrently developing a mural for AHCH. During a presentation at AHCH on January 26, Dr. Pinder said murals in communities experienced far less crime and maintenance of murals became a community responsibility, resulting in solidarity. She also noted that some murals have become sites of activism and social justice such as Chicano Park in San Diego and the Wall of Respect in Chicago during the 1960s. She also highlighted Nani Chacon’s portfolio of murals. During the infancy stages of the AHCH mural, Nani could be seen on a fork lift, scaffolding the wall of AHCH, painting and coordinating students to apply paint to the mural design. Her murals are on public exhibit in Albuquerque, Santa Fe, The Navajo Nation, and in New York. 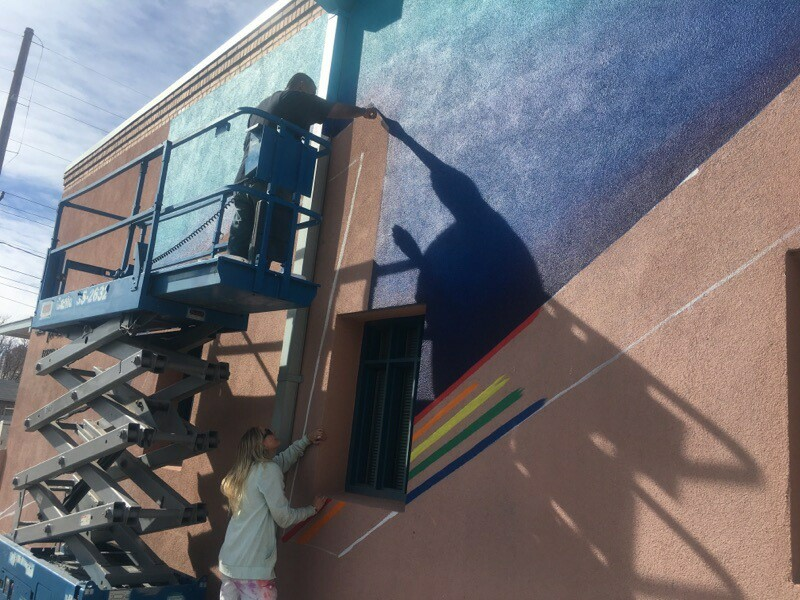 Installation of the mural at AHCH

During the unveiling, Chacon said it was an honor to install the mural with the help all agencies involved including the students and thanked Angel Pavia and Adriana Ortiz-Carmona, of Working Classroom for being the lead assistants in installing the mural. Nate Nez and fellow students not only learned about the history of murals in Dr. Pinder’s course, but also about the necessary steps involved in producing and commissioning them. His mural design was selected to be painted on the east façade of AHCH. In an interview with Nate, he said working on the mural project became personal because he experienced homelessness while battling post-traumatic stress disorder and alcoholism in Phoenix after his service in the U.S. Army. He said, “I ended up in Phoenix and I became homeless and I was living under bridges. At that point, I knew I had to change,” said Nate. He recently received his Bachelor’s Degree in Art Studio in December from UNM.

ArtStreet, an AHCH program, was a natural space to facilitate aspects of the project. ArtStreet is a community art studio accessible to all artists regardless of their housing status. The program provided time and space for artists to complete the installation of the mural. 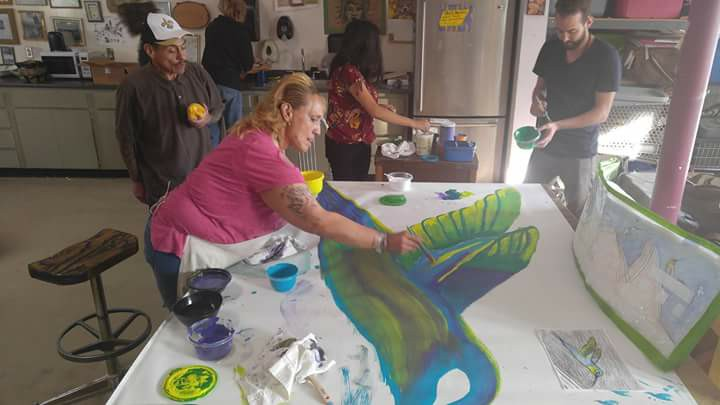 The unveiling of the mural was made possible through partnerships aligning themselves with the mural movement and recognizing the powerful and cultural significance of linking arts to communities of color and other underserved communities. As To Spread Happiness integrates itself into the vibrant culture of Albuquerque and AHCH, we must remember murals have shaped revolutions and in large, murals serve as the nexus between art and the culture of a community. 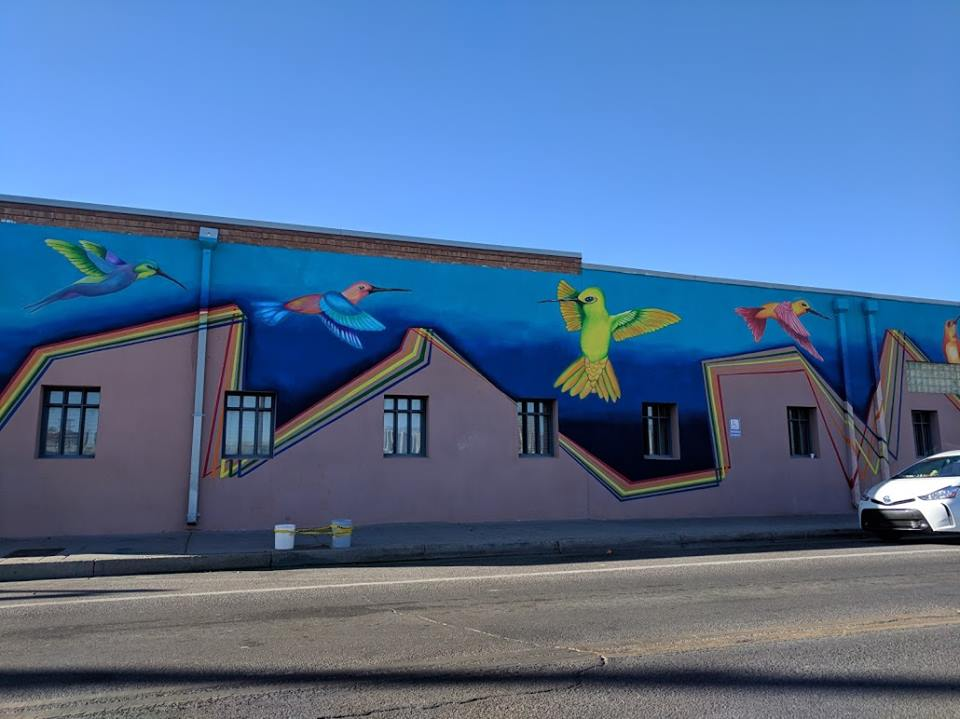 "To Spread Happiness" mural at AHCH

The Greek artist known simply as iNO wrote: “If you want to learn about a city, look at its walls.” You are cordially invited to AHCH to see the mural and learn about the work we do to ensure social justice. For more information on Albuquerque Health Care for the Homeless, or to donate, call 505-338-8038 or visit the website at www.abqhch.com.