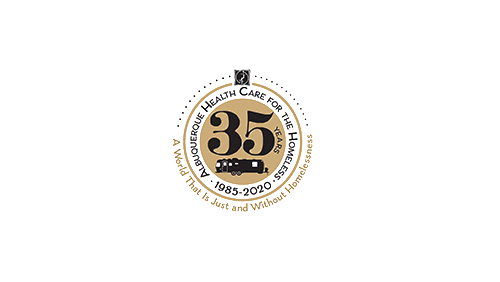 Because Homelessness is a Violation of Human Rights, AHCH's Friday series on Facebook, Instagram and Twitter,  #HumanRights365, aims to remind everyone that each one of us, everywhere, at all times, is entitled to the full range of human rights, that human rights belong equally to each of us and bind us together. Because ending homelessness is about demanding basic human rights and guaranteeing social justice, the decision to use social media as a tool to advance the recognition of a person, a partner organization, or a topic that upholds the fundamental proposition in the Universal Declaration of Human Rights adopted by the United Nations became a weekly series. Our weekly series features Human Rights activists and pioneers.

Check out some of our favorite AHCH #HR365 posts from this year and stay tuned for monthly blog updates on this series, follow our social channels and the hashtag #HR365!

A Few of Our Favorite AHCH #HumanRights365 Posts 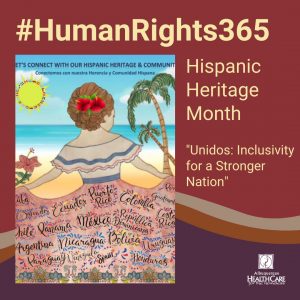 abqhch: September 2, 2022: September 15 marks the beginning of National Hispanic Heritage Month, and we're kicking it off early by highlighting the achievements, histories, traditions and cultural diversity of Hispanic/Latino/Latinx Americans in our #HR365 series!

The national observation began in 1968 as Hispanic Heritage Week under President Lyndon Johnson and was expanded by President Ronald Reagan in 1988 to cover a 30-day period and was enacted into law on August 17, 1988. [1]

This year's theme, "Unidos: Inclusivity for a Strong Nation" and poster were submitted by Ms. Irene Matos Chan and selected by National Council of Hispanic Employment Program Managers (NCHEPM) members, Federal agency partners, Employee Resource Groups and members of the general public selected the theme through a substantive voting process. [1]

Both the theme and poster reinforce the need to ensure diverse voices and perspectives are welcomed in decision-making processes, thereby helping to build stronger communities and a stronger Nation. [1]

Though a single month could never sufficiently cover the countless people who have championed human rights for Hispanic/Latino/Latinx Americans, we look forward to spotlighting a few for September's #HR365! 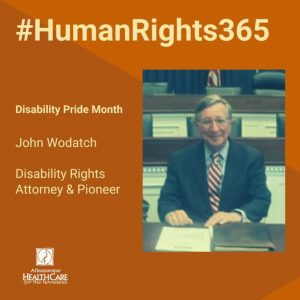 abqhch: July 29, 2022: It's hard to leave the name John Wodatch out of any discussion about disability rights, and we're happy to highlight him in this week's #HR365!

John played a key role in developing pretty much every U.S. disability policy and regulation since 1977. In addition to being one of the drafters for the Americans with Disabilities Act, he was responsible for the enforcement of Title I, II, and III. As such, he was the chief author of the Department of Justice’s ADA regulations. He was also part of the U.S. delegation to the United Nations that helped develop the Convention on the Rights of Persons with Disabilities.

From 1990 until 2011 he served as the Director and Section Chief overseeing all interpretation, technical assistance, and enforcement of the ADA at the Department of Justice.

More recently, John worked with the U.S. Department of State representing the U.S. throughout the world to help other nations develop their versions of the ADA.

Now "retired" John serves as president and board member of the National Association of ADA Coordinators and acts as a consultant in Washington and beyond.

John has worked tirelessly to make Article 25 The Universal Declaration of Human Rights a reality:
Everyone has the right to a standard of living adequate for the health and well-being of himself and of his family, including food, clothing, housing and medical care and necessary social services, and the right to security in the event of unemployment, sickness, disability, widowhood, old age or other lack of livelihood in circumstances beyond his control.

@JohnWodatch not only helped shape disability rights for Americans but for people all over the world. He is definitely a #HumanRightsHero! 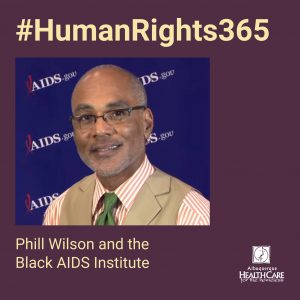 abqhch: June 17, 2022: A voice for HIV/AIDS activism, this week's #HumanRights365 highlights Phill Wilson who's work is vital with today's climate during the COVID-19 pandemic.

Activist Phill Wilson has spent four decades fighting HIV/AIDS in Black communities. After his own diagnosis in 1981, Wilson became an advocate for communities disproportionally affected and founded the Black AIDS Institute in 1999.

The institute was instrumental in mobilizing Black community leaders, media organizations and other groups to be the messengers for science, and effective disease prevention and treatment. Wilson and his team fought hard breaking through the stigmas of homophobia and HIV positivity required to meet people where they were.

Wilson's critical early voice applies for all infectious diseases needing social solutions, not just biomedical ones, like COVID-19. Wilson says "one of the country's most serious failures in responding to HIV/AIDS was its failure to empower Black leaders to communicate knowledge to their communities,"

"What we need to be doing now if we're going to be serious about either the AIDS epidemic... or fighting COVID-19, we need to be building and strengthening institutions in these communities," Wilson said.

Stay tuned for monthly blog updates on this series and follow us on social! #HR365